Hey everyone and welcome to Theorycrafting: Cosplay Edition!

This series features my ideas for how to potentially bring a specific character to life for cosplay.  My hope is to give people a quick look into my design process and what materials I like to use use when considering building a character.

As always, discussion and recommendations of which characters (from any series/game, etc) you would like to see theorycrafted in future are more than welcome. ^_^

This week’s character is: Draven (Classic Skin, League of Legends) 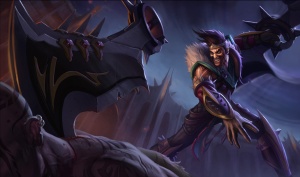 Draven (3D Model) is the brother of  the Hand of Noxus, the leader of the city-state’s military forces, but Draven never cared for the rigid discipline of the regiments. He craved personal glory and the adoration of the crowds, so he left the  military to become an executioner. He soon turned his prisoners’ deaths into sadistic spectacles, giving them a chance to run before he cut them down with a perfectly thrown axe. The masses of Noxus loved Draven’s shows, which in turn fed his narcissism. Eventually Draven left Noxus to pursue his ultimate goal: turning the League of Legends into the League of Draaaaaaaaaaven.

Draven’s character is flashy and spectacular, so it’s especially important with this costume to have a strong silhouette. You could also add a few details of your own to this costume if you think it would improve the effect–more flair and shine would be in keeping with Draven’s character, as long as you don’t overwhelm the original costume. Here’s some early concept art to give you some ideas: 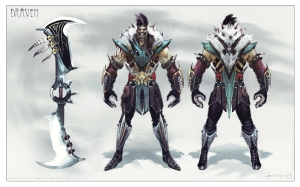 I’ve thought about this part of the costume a fair bit and I think that keeping the stiffness, shape, and thickness are all really important components.  I don’t think you can quite get the right effect with just fabric alone, but it isn’t quite armor. 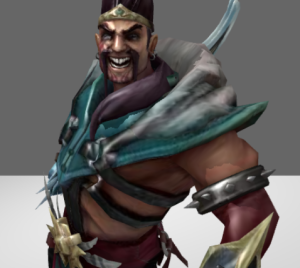 Thus, I think that I would use EVA foam (Tutorial) to give a base thickness and shape to the mantle.  Once the base form is complete, I would cover it over with fabric and have the main seam/clasp down the center on the chest area.

For the furred portion, I would add in some upholstery foam on top of the EVA foam to create the slight hump and definition that the fur has.

For the belts/straps, I would use a dark brown leather since I think it will create a nice transition from the cool mantle color the the warm reds on the rest of the costume.

For the spiky bicep circles and bracers, I would consider mixing materials.  I think I would use EVA foam for the base circle since it’s a thick material.  I would then sculpt the spikes out of clay or some other material that you may be more comfortable with.  The other, more expensive option would be to use Worbla and/or Wonderflex.  The Worbla would make sculpting the spikes fairly easy, but you will have to use more material for the base to make it thicker.  It would be up to you if you prioritize budget or ease and uniformity of material.

I would gravitate towards a stretch maroon fabric that feels fairly sturdy for the fabric portion of the arms.   A stretch knit may work well.  I don’t think that spandex would work well for this character since it tends to have a bit of a weird sparkle to it.  When you purchase this fabric, make sure to account for the belt/waist band as well, since I think they are the same material.

For the gloves, you could make them out of a black leather and white quilted fabric for the palm, or you could try and find similar looking sporting gloves and remove any logos that are on them.  If you aren’t so concerned with accuracy, you can just use a pair of black gloves.

Lastly, I think that I would make the fastening/straps out of leather and install buckles.  If that’s out of your budget, there are other fastening options out there, such as D-rings or velcro.

I think that the base pants are a softer, more comfortable fabric and fairly snug (but not quite skinny jeans).  You could either find similar pants or you can make them.  On the thighs, I would use a quilted fabric on top of the base pants so that it gives more dimension to the line of the pants.

The belt buckle could be made of any number materials, depending on what materials you are comfortable working with.  I would personally consider Wonderflex or Worbla.

I would start with a base black shoe and then build the armor pieces to cover them and your lower leg. 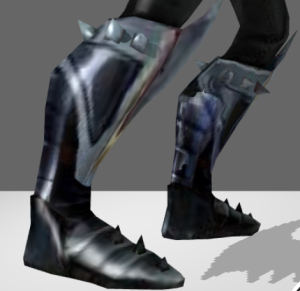 I would, once again, recommend using Wonderflex or Worbla for this portion (Kamui’s Tutorial and Volpin’s Tutorial on Wonderflex).  You can create sturdy armor pieces and make them segmented so that they flex with your leg.  As a note, the front shin portion of the armor is a separate piece from the back of the calf.

For attachments, you can use buckles for the calf armor.  A strap can also be used for the top of the shin piece, but you can also have velcro on the calf armor’s lower strap to stick to the inside of the shin armor and keep it from sticking out.

To make the axes, I would take a stroll through your local hardware store’s plumbing section to find a pvc fitting that spins.  I know that they are out there, I just don’t know what they are called.  Once you find this piece, you will want to install a handle in the center. 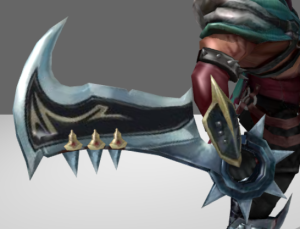 After this, you’ll want to install a support post for the blade and then build the blade around it.  Insulation foam (Tutorial) may be the easiest material to create the blade with.

That pretty much sums up how I would take a crack at creating a Draven cosplay.  If you have any questions or would like anything clarified, feel free to ask me, or if you have any requests for characters you would like to see, just let me know in the comments!

Thank you for reading, if you want more, check me out online at my Facebook Page or via Twitter.