Hey everyone!  Welcome to Theorycrafting: Cosplay Edition!  This series will be updated weekly and features my ideas for how to potentially bring a specific character to life for cosplay.  My hope is to give people a quick look into my design process and what materials I like to use use when considering building a character.

As always, discussion and recommendations of which characters you would like to see theorycrafted in future are more than welcome. ^_^

This week’s character is: Ezreal (Classic Skin, League of Legends) 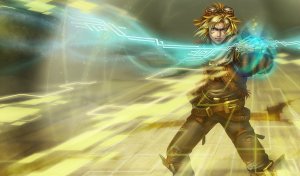 A genius gifted with latent magical abilities, Ezreal (3d model) always loved exploration and discovery, though his expeditions often led him into trouble. Eventually he was hired as the official explorer of his city-state, so he could continue his dream job with official permission. On one of his expeditions into a long-forgotten tomb, he discovered a mystical gauntlet which let him tap into his magical ability, but at the cost of being summoned to the Fields of Justice. Now he spends his time enthusiastically delving into ancient ruins and reluctantly fighting as a champion in the League of Legends.

I have gotten a few requests to tackle how I would go about making Ezreal, so here it is!

A lot of people have created Ezreal fairly well from articles of clothing that they already own, made, or scrounged, so Ezreal has the potential to be a fairly easy, inexpensive costume to make.  One of the versions of Ezreal that I have seen and particularly like this one by Kohalu Cosplay:

I think that Kohalu, particularly, was able to get the silhouette and pants right, which really helped with the overall feel of the costume.  Also, can you believe that he made the gauntlet out of paper?!?

Here is another example of a very well done Ezreal  (I wish I knew who the cosplayer is!):

In this version, the cosplayer did a good job with the jacket and glove, in particular.  The detail really helps to make the costume pop and seem real.

There are already a lot of good Ezreal cosplays out there.  The following would be my approach to take creating Ezreal a step further and to make him really come to life, so this way will be more expensive and time consuming than most Ezreal cosplays.

The material of choice for the pants would be denim or a sturdy canvas-like material.  Since Ezreal is an explorer, it would make sense that his pants are made from a very durable, rough and tumble material.   I would make sure to go for a darker blue material.

I think that getting the line and shape of the pants is important since they aren’t just a regular flared leg.  I would create the entire pant leg as a whole and then add the calf belts afterwards, and securing them to the pant leg along the inside seam so that they don’t slip.

Including the patches/rips and mends are important to include as well to visually relate Ezreal’s character and personality.  If you wanted to, you could also add in some weathering and dirt/grunge.

There is a discrepancy in the color of Ezreal’s between the available artwork and his in-game model.

For the shirt, I would personally go for a steel grey-blue, a little lighter than his pants so that there is some differentiation between the color.  I think that a knit, soft wool (like a wool undershirt) would work well as a material choice.

The neck warmer/scarf thing may work well as a cream or beige color rather than a stark white or a dark blue.  I think going for a blue would make the costume a bit too monochromatic, but pure white would be too stark of a contrast and wouldn’t quite work for an explorer mapping out underground tunnels.  I would think of using a thicker, soft fabric, like flannel, but not quite.  A soft wool may work well.

Although Ezreal’s hair in the in-game model is bright yellow, I would go for a natural blonde because, in my opinion, bright yellow hair is a bit off-putting.  I think that the Derek wig from Arda Wigs would work really well as a starting style in Ash, Platinum, or Light blonde.

That being said, if you already have blonde hair at about the right length, style and work with it!  It will be awesome.

There are a number of options for the goggles.  If you wanted, you could purchase some steampunk goggles in a similar style or make your own.  If you start with a base of swimming goggles or similar shaped safety or welding goggles and then build/sculpt off of them.  I think welding goggles will give you the closest base shape and you can probably switch out the lenses so that you can actually see out of them.

Leather.  I would definitely use leather to custom make the belts and jacket for this project as it allows for a sturdy feel and you can emboss the leather to create rich details.  I also think that it would be awesome to include blue EL sheeting to make the pattern on the back of the jacket glow!

As a warning, this would be the most expensive portion of the costume as leather can get pricey for the materials.

Since I don’t have the time or space to describe all aspects of leather working in this article, I will leave you some really useful links for tutorials and materials.

Ok, so I would use tooling leather (probably economy for budget).  Once you have the leather cut and sewn together, you would tool/emboss it.  Since tooling leather comes in its natural color, you would then dye it to the desired color using a water based leather dye (water based dyes leave the leather more supple than other dyes).  I would add in the buckles, studs, and grommets/rivets at the end.

To care for the leather, there are quite a few leather cleaning products out there.  If you want to keep the leather supple, use neatsfoot oil.

I have seen the glove made a number of different ways, from paper, to leather, to armor!  It’s ultimately up to you to decide what you think the glove is actually made of, but I think I would go for a base of leather with an armor feel.

Basically, what I would do is take two layers of leather and sandwich a layer of formed wonderflex between the two (much like how I made the arm brace for Sejuani) for the top of the hand and the wrist flares.  This would help keep the shape and keep the leather stiff.

If you made the glove this way, you could also cast the glowing dome in resin (tutorial by Kamui Cosplay) and attach it to the wonderflex before the layer of leather is put on.  You would cut a hole in the leather for the gem to come through and it would look like the gem was set into the glove rather than just resting on top of it.

That pretty much sums up how I would go about creating an Ezreal cosplay.  If you have any questions or would like anything clarified, feel free to ask me, or if you have any requests for characters you would like to see, just let me know in the comments!

Thank you for reading, if you want more, check me out online at my Facebook Page or via Twitter.